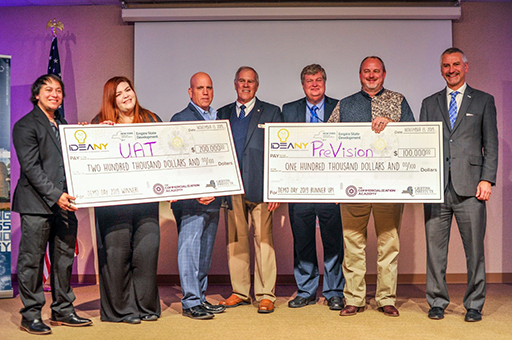 With nearly 150 in attendance, United Aircraft Technologies (UAT), from Albany, NY, walked away with the Grand Prize of $200,000, and runner-up, PreVision, from Syracuse, NY, took home $100,000 for their startup!

The four remaining teams were awarded up to $8,000 in "consolation" prize money to reimburse for expenses incurred during the incubation process.

“It’s completely amazing! We are so excited and over the moon, because this money is the last push we needed to complete our certification,” said Evaguel Rhysing, founder and CEO of UAT, “We are at the spot where we are getting ready to push this product out there and the timing is essential, so these funds will get us ahead and get us ready to commercialize.”

“From the technical view, giving back to the warfighter is the most important thing for me,” added Daryian Rhysing, founder, CTO and Executive Chairman of UAT, and a United States Army Veteran.

"We’re actually going to get to go after our markets even more aggressively now, and that’s great," said Greg Walker, co-founder and president of PreVision, “We have some customers we need to do demonstrations for, maybe some custom demos, and now we get to actually build out those demos quicker. We’re in a high-touch industry, we spend a lot of time with customers to win their confidence and their trust, before they buy, and this will let us do that faster.”

The judges’ panel evaluated each startup based on such factors as: the ability of the business to affect the Mohawk Valley’s startup ecosystem and high-tech economy, the culture of innovation that has been created within the startup due to incorporating AFRL technology, the sustainability of the solution beyond the initial startup period and go-to market strategy.

The startups were incubated by Liddy Enterprises, while embarking on an acceleration process to either build a sustainable startup, or enhance technology from an already existing startup, with Department of Defense intellectual property from the Information Directorate.

“The Griffiss Institute is extremely excited to announce the winners of the IDEA NY Business Accelerator Competition,” said Bill Wolf, Griffiss Institute president. “This evening’s event marks the culmination of the latest cohort of the AFRL Commercialization Academy and the start of the second IDEA NY Business Accelerator Program. Thanks to a New York State Grant, the IDEA NY is providing the funds and opportunity that will enable both, UAT and PreVision, to grow their business in the Mohawk Valley in ways that were never before possible. IDEA NY is enabling the Griffiss Institute to accelerate its mission in providing education, technical development and economic opportunities to new startup businesses in the Mohawk Valley.”

The six startup teams who took the stage on Wednesday evening were:

On the Curb exists to change the world of data.

Seven Sundays is developing systems for the future of hospitality.

Empire State Development Acting Commissioner and President & CEO-designate Eric Gertler said, "Some of the world’s most pioneering and successful companies began as a conversation over a cup of coffee or in a garage—IDEA NY could be the launching pad for a brilliant idea that creates something great and grows the regional economy.”

After yesterday’s Demo Day, the winning teams will participate in the year-long IDEA NY accelerator program. Additional assistance will be provided to the teams through the Griffiss Institute Business Incubator, a Certified NYS Business Incubator. The winning teams will be required to reside their business in the Mohawk Valley region for a 12-month period after Demo Day.

The 2019 AFRL Commercialization Academy program has been made possible by the generosity of our community supporters; M&T Bank, National Grid and NYSTEC. 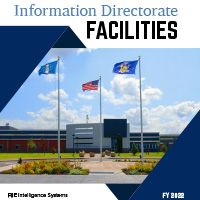