ROME, NY — The AFRL Information Directorate’s (AFRL/RI) Commercialization Academy held its Spring Demo Day on June 29, at Mohawk Valley Community College, in Rome, New York. Investors, entrepreneurs, tech enthusiasts, and the local business community, came to watch six innovative, tech startups take the stage to pitch to judges, and an audience of over 90, on how they have been disrupting the market with Air Force Research Laboratory Information Directorate technologies as a pivotal part of their business model.

$20,000 from program funders was up for grabs as teams took the stage for three and a half minutes each, pitching audience members and a panel of judges, to see which startup company and AFRL/RI technology-based products and services were most deserving of the money.

The six startup teams who took the stage on Thursday evening were:

Intake – Intake is a digital health company that is developing next-generation diet-tracking technologies, in hopes of eliminating the need for food diaries and journaling.

Mentis – Mentis is a cybersecurity company focusing on preventing viruses and all forms of malware from infecting computer through internet browsing while at the same time protecting privacy.

The judges’ panel evaluated each startup based on such factors as: the ability of the business to affect Upstate New York's start-up ecosystem and high-tech economy, the culture of innovation that has been created within the startup due to incorporating AFRL technology, the sustainability of the solution beyond the initial startup period, and marketing strategy.

The startups were incubated by early-stage venture capital firm Wasabi Ventures, while embarking on an acceleration process to either build a sustainable startup, or enhance technology from an already existing startup, with Department of Defense Intellectual Property from the Information Directorate.

Rome native, Brian Abbe, CEO and founder of Mentis, walked away with the judges’ vote and $15,000, while E-Health Now won the audience vote and $5,000 for their startup.

“Winning Demo Day means that I can get to the next level, so this money will be used to help me further develop the product, and help me to mature the product, to the point where I can begin to sell the product. This gives me energy to keep going,” said Abbe of his win.

“Honestly, I am honored,” said Vinayak Kumar, Medical Lead, E-Health Now, “Honored that everyone believes in our idea as much as we do. So, this is just more inspiration to keep pushing forward to make this product a reality.”

The AFRL Commercialization Academy is a Griffiss Institute entrepreneurial education program. The Griffiss Institute welcomed Wasabi Ventures to lead the program in 2015. The program is designed to develop entrepreneurial leaders through the commercialization of federal intellectual property to facilitate the growth of Upstate New York’s economy through tech startups, and potentially speed technology products back into the hands of the Department of Defense.

"The AFRL Commercialization Academy is on target to creating a new-age local technical ecosystem, whereby the residents of the Rome-Utica area in particular, will be the recipients in not only new jobs in the area, but opportunities for their children to engage in these new companies as well as participating in the Commercialization Academy process. You have seen six today, and we anticipate eight more in the next cohort. By the end of this year, which will mark the four-year anniversary, this program will have created 34 startups and although not all are local, we have started the ball rolling for the future to make this happen,” says Frank Hoke, Tech Transfer Director at Griffiss Institute.

The Commercialization Academy is looking for the next great founder. The next program begins in August 2017. Contact Griffiss Institute for more information at 315-838-1696. 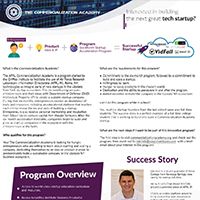