After fourteen years of leadership, William Wolf is retiring from the Griffiss Institute 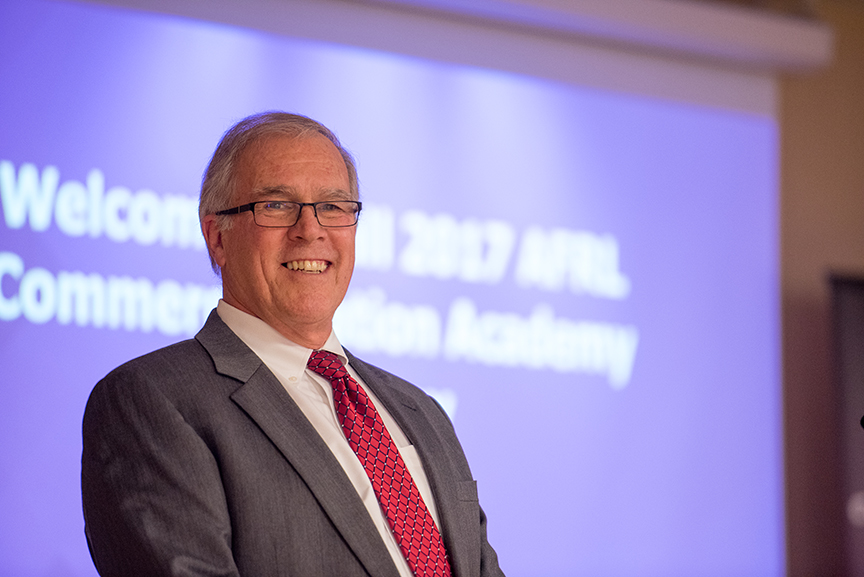 Rome, NY – William Wolf, President of the Griffiss Institute (GI), has announced his plans to retire at the end of the month as the Institute moves into its new home in the Innovare Advancement Center. Mr. Wolf has led the institute for the past 14 years, taking it from a one-man operation in 2006, to a thriving enterprise which currently employs over 30 professionals and has over $200 million dollars in contracts with the federal and state government. His infectious, positive attitude is clear in his message to the GI staff. “I have been extremely fortunate and enjoyed the opportunity to lead this great organization,” said Wolf. “It has been a wild and wonderful ride and I thank you all for taking the ride with me.” Today, the Griffiss Institute is a major player in technology transfer, training and education, and economic development in the Mohawk Valley.

Mr. Wolf’s leadership has paved a path of success and growth. Most recently, the Griffiss Institute partnered with the Air Force Research Laboratory Information Directorate (AFRL/RI) and Oneida County in establishing the Innovare Advancement Center, a new open innovation campus located on the Griffiss Business and Technology Park. This new center will enable a robust high-tech entrepreneurial, R&D, and educational ecosystem for the region and the nation by driving advancements in key strategic areas, including artificial intelligence, machine learning, cybersecurity, and quantum. This research will take place not only locally, but also at partnering organizations all over the world.

“This is the ideal time for me to step aside and bring in fresh talent to lead this giant step forward,” says Wolf. “It is my hope that new leadership will enable the Griffiss Institute and the Innovare Advancement Center to become a truly world class research center and further establish Rome and the Mohawk Valley as the Center of Excellence in these important technologies and all that this implies for the growth of the local economy”.

Before his tenure at GI began in 2006, Mr. Wolf began his career in 1968 as an electrical engineer at the Rome Air Development Center (which later became the Air Force Research Laboratory). He held a variety of positions with progressive responsibility in both management and technical leadership.   During his career he served on numerous technical and international committees relating to cyber security. He served as the Air Force lead and Chair for Project Reliance IA Subgroup. From 2004 through 2006, Mr. Wolf served as the US National Lead for The Technology Cooperation Program (TTCP), an international group comprised of scientists from the US, United Kingdom, Canada, Australia and New Zealand addressing technology developments in cyber security. He retired from civil service in March 2006 as Chief of the Cyber Operations Branch and later that year assumed his position as President of the Griffiss Institute.

A national search is being conducted for Wolf’s replacement.